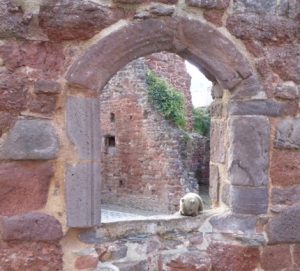 Exeter on a Sunday was a great idea! Easy parkin (shops don’t open till 11am so nice and quiet), and plenty of space at tha launderette.

If only Wally the Wise  Owl would stop flirtin with Audry tha Sat Nav. I’m not jealous (I have Olivia) but it does make her lose concentration an imagine we are in tha middle of a field sometimes.

We made it safe an sound anyway an left Mark to do the laundry with his sudoku while we got ta take a look see at tha Exeter Cathedral. So beautiful.

I got plonked on tha waindow sill of the remains of the Alms House (built ova a Roman ruin as per usual) so they could take a photo.
Then afta lunch it was time for a quick trip ta Thornton’s (the bestest toffeeeee) cause She needed ta buy some more Treacle Toffee. We did already have some for Her mum. from Bath. but they already ate that.

I was sat between two lovely chocolate teddy girls for a Thornton’s photo but when I saw tha shot I was horrified (now I’m a celebrity I get to approve photos you know) so I made them take a second one….. as if anyone would believe I was worth a third of 20 pound! The cheek! 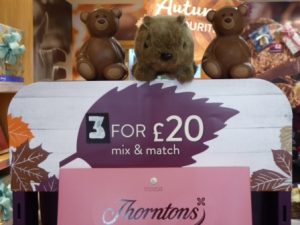 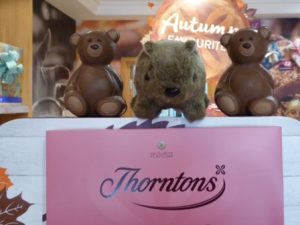 I mean look at it. The second one is clearly more classy isn’t it?

See ya all tomorra anyway folks.