Wilbur’s Travels – A Chateau, A Cathedral an a Art Shop 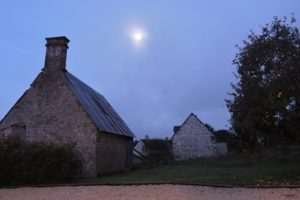 Well I told ya we was leavin nice an early an here is the last look from tha Apple Barn.  This isn’t it – this is next ta tha Barn an is waitin ta be done up itself.
It was a great place ta stay for sure an if She coulda taken anything with Her from there it woulda been tha shower an hot water!

Tonight (an tomorrow night) we are stayin in Chartres. Near tha train station so we can do tha final Paris days on foot. We had anotha bleep in tha smooth sailin of the trip on tha way but. An alarm an a light went off on tha dash of tha fancy pants Peugeot we rented. It ended up just bein a service thingy an cause it’s a new car, it had a warnin. 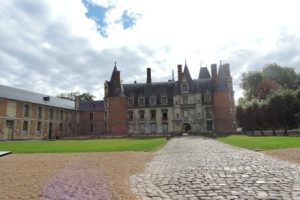 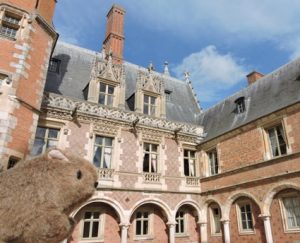 We dropped in ta have a ganda at tha Chateau de Maintenon ( it was built in tha 13th Century so bits of it is real old).

Here is tha front an my handsome mug showin tha back. It has some amazin (and famous) paintins still 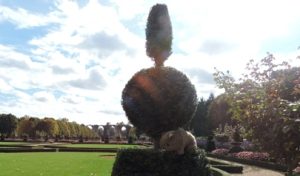 hangin and the remains of an unfinished aquaduct in the back.

The gardens was spick an span an all tha bushes clipped ta behavin themselves. It even had a moat!

Afta that we went an booked inta the hotel, basic but nice. They decided ta return tha car early an Mark was very happy about that as it is a bloomin big beast. 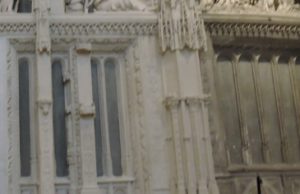 Then it was a quick walk ta the famous Chartras Cathedral.

They have been cleanin an restorin it for many years an you can see how great it’s gonna be. Very delicate work removin a layer of grime, sandin an fillin using original technoques an then white wash paint ta protect.

On tha way back guess what She found!!!! 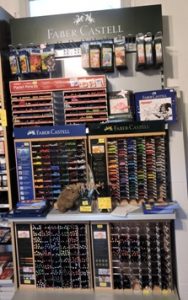 An Art Shop! They had all tha craft stuff down stars but upstairs was all tha ART stuff.

They are going back tomorrow ta check out tha stock but She took a photo of me in front of tha small Faber-Castell stands. Just ta prove She found one I guess.

Well that’s about it for this tired little wombat. I’m off ta try tha new bed. Bet it’s not as comfy as the great one at tha Barn. Mmmm, just right.

See ya all tomorrow – an don’t forget ta comment an share this so I can be famous. I know you can do it… go on! Stop goin goo goo on cats an check out my cute lil face.