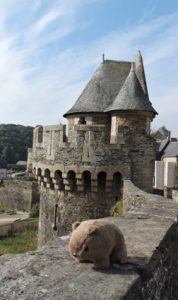 Our day out today had us travellin ta have a ganda at tha largest fortress in Europe! It had a history from tha 10th ta tha 20th century.

She took me all tha way ta tha top of many of tha towers an we could walk on lotsa tha outa walls. Bit of a mess in tha middle but so much fun.

See me here up at tha top!  So many spiral staircase steps to get up that high. Course, I didn’t have to walk up all tha steps haha, I got carried cause my tiny little legs couldn’t make it up them big stone steps. 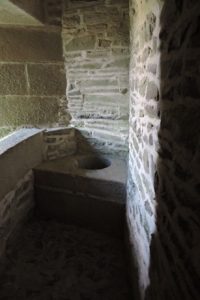 Did you know that some of tha posha chateaux even had loo’s?

No messin mates, I wanted ta get a photo sittin on one but She was worried my little furry butt would fall down tha hole.

She took one of just the loo for me. They each hada window – loo wiv a view hey? They stuck out ova tha moat an it all went straight down. Bet it was a lot stinky. 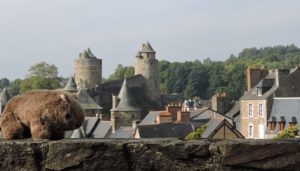 Here’s anotha view from tha top of tha wall. Not as high as tha turrets but look at those roofs.

I like being up high, makes me feel taller. Mum says I’ll be a bit taller when I grow up, she’s a fair bit bigger than me cause I’m only a year old ya know. 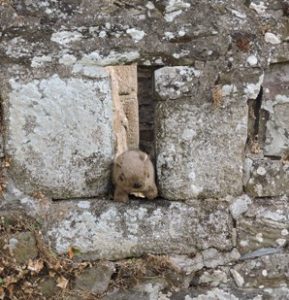 Maybe I’ll be tha first wombat ta live in a tree. Not countin my great uncle and tha drop bear fable cause he didn’t live in one, just dropped outa one!

I could be tha best Eagle eyed scout, watchin out for danger… I could even get Perry – one of my mates – ta fly around an help. He’s a Peregrine Falcon an has  the BEST eyes .

Look! Here I am in one of tha arrow slits, I fit in pretty good.

Anyway, it’s that time again. This little furry wombat is off ta my burrow in tha back pack for tha night. It’s an early start tomorrow cause we are goin in search of Pirates an Smugglers!!!!  Catch ya all later.