It was still dark when we left for St Marlo this mornin, even though tha clock said 8am.

One of tha things that ya 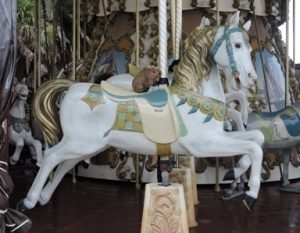 haveta rememba here is that most shops open at 10am an close for lunch, then open again! No wonder if it doesn’t get light till 9am hey?

As we came up ta tha main gates (it’s a walled city ya know) there was a round-about just sittin there. No music or lights.

No prolemo as this cute little filly said I could sit in her saddle. Don’t tell Olivia though as she had ta stay at home. 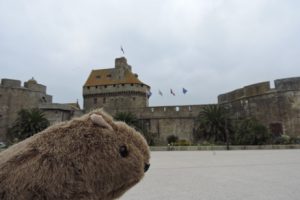 Well we got ta tha gates and the streets were so narrow, an full of cars.  It looked so big an wide from tha outside too.

The French just stop an put their hazard lights on outside tha shop they want to go in, run in an get whateva, then come out an drive away!!!!

They all walked around tha ramparts – tha whole way round tha city, which was 2km. Then it was a trip walkin across ta one of tha fortress islands. Tha sand was made up of all broken bits of shell an tha beaches were really wide.

They even had a swimmin pool, can ya see it with tha rock edge ? Bet it’s really busy in summer! 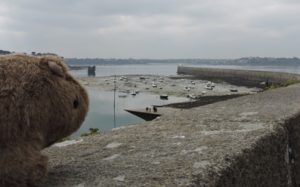 Found a graveyard for boats too. She said they were just waitin for tha tide ta come in, but I know that they had all found a place to die – must be a bit like elephants hey?

Look at the poor things all layin crooked an muddy. 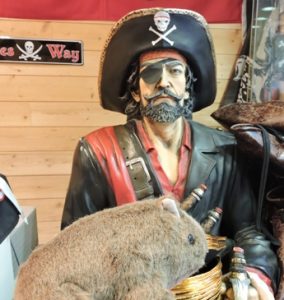 Then in one of tha shops, there that all were…. old ones, ugly ones, girl ones, ones with one eye. You know they all wanted a photo but tha captain said only one an only him.

I woulda sat wiv tha one that looked like Jack Sparrow but he was busy with a busty wench who was a strange green colour – smelt a bit fishy too.

Hope ya have enjoyed todays trip. Don’t have a clue what’s on tomorrow as She can’t actually walk proper at tha moment. Should be good an stif tomorrow (Her, not me. My little fluffy tootsies are great thanks for askin).

Catch ya all on tha flipside maties.