Another visit ta Bayeux, this time ta tha Art Museum. When we brought our ticket ta see tha tapastry we got a 3 fa one an I am not gonna talk about tha war one so tha museum it is! 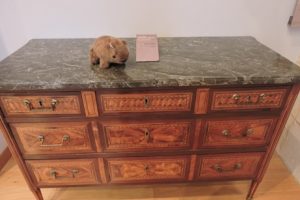 It was tha best laid out art museum I have been in (OK, I haven’t been in all that many, I’m just 1 year old! She said it was tha best OK?)

They mixed furniture an paintins an artifacts in time periods so it started with tha flint arrowheads an axes an stuff…. 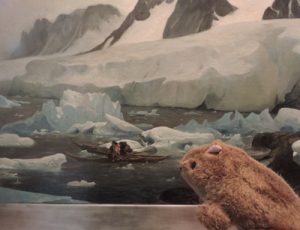 They had a lotta noodie hoomans in paintins (all bare an pink like, not much fur on most ov them).

I found one for ya an it was Eskimos (Inuits now I think theyz called) in 2 kayaks kissin in tha ice. At least they weren’t noodie.

She took lotsa photos of different paintins an hands an stuff. Boring… but some of tha painting had some lovely jewels painted on. 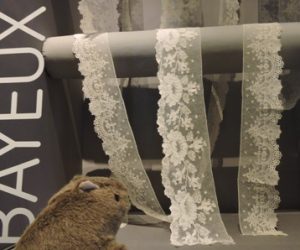 A big room was dedicated ta lace an lace makin.

Some ov it was as fine as spiderweb an some was black wiv gold threads. There was half done stuff an how ta do it videos. Too hard for Her she said.

There was drawers of different patterns and from different areas (some of tha old bits looked like they had been soaked in tea or somethin). 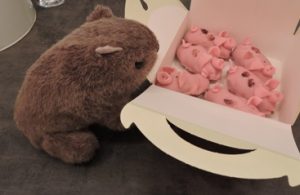 On tha way back ta tha car we passed a Pattiserie (fancy bakery for you lot), Malissa squeeled and ran inside so we had ta go too.

She found her pink pigs!!! M&M have been lookin out for them all through tha trip. Now we have some. I tried ta tell them ta run away so they wouldn’t get eaten but they WANTED ta be eaten! Go figure!

Don’t know what we’ll be doin tomorrow, it’ll be a surprise for all of us hey?  Till then, au reviour